The Future of Banknote Security – A Professor’s View

When handling cash, we normally glance at each banknote for less than a second. Central banks and banknote issuers are coming to realize that this brief glimpse provides a crucial opportunity for public authentication – giving them a chance to keep ahead of counterfeiters. Ease of use and counterfeit risk are the most important things to consider when specifying new banknotes. But selecting the best authentication methods and security features does not only involve technical and material experts. We also need visual perception and cognition specialists to understand fully how humans use and respond to the complex visual information printed on a banknote.

Jane Raymond is Professor of Visual Cognition at the University of Birmingham in the UK and CEO of Secure Perception Research, Ltd. Her expertise has been sought by some of the world’s leading central banks to guide the development of new banknote series towards maximum public security and effectiveness based on cognitive science and perception testing. 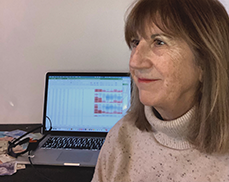 “I have always been fascinated with how we use visual information to shape our understanding of the world. I’ve spent my professional life studying how the brain and eyes are used to structure our visual memory, control our visually-based judgements, and develop our visual preferences. This knowledge seems very relevant to banknote design. In my view, the banknote industry needs to involve more natural scientists – not only material science experts – to make real innovations”, says Jane Raymond.

Click here to see a video with Jane Raymond about how to spot a fake.

Jane is originally from Nova Scotia, the southeastern province of Canada. After university studies in the provincial capital, Halifax, she moved on to work in Canada and the US where she advanced her academic study of visual perception. She then moved to the UK where she combined her lab and theoretical work with a keen interest in public perception of consumer goods and brand protection.

During this phase of her career, Jane worked on a range of problems related to how the public perceive complex public information including TV, website, and outdoor advertising, consumer packaging, and even fine art. She worked with a number of large global companies fighting counterfeiters and brand copycats threatening everyday products.

“I noticed that as consumers we don’t spend a lot of time consciously trying to identify whether a product is fake or genuine. Even so, a fake product can get our attention if certain things are not “right”. I also learned a lot about this from working with court cases, on legal brand and trademark challenges. People don’t like to be tricked,” she says with a smile.

That eventually led her to the world of public perception of banknotes. She was captivated by studying these artistic and beautiful stimuli within the laboratory walls – and since then, she has devoted much of her time to helping central banks and banknote producers around the world.

A perception study involves the participation of a set number of people of various ages from the general public. Each person is presented with a series of banknotes and asked simple questions often with a time limit, e.g., about the note’s denomination and its authenticity. The banknotes are typically viewed under different conditions, such as high versus low light levels to see if the security features are still easily distinguishable.

In a 2020 public perception study, Jane Raymond and her team discovered that the public could spot fake banknotes in a third of second if the security feature included 3D.

“The results were super clean, even in low light situations. The research shows the real potential of modern 3D technologies to reduce the circulation of counterfeit banknotes,” says Jane Raymond.

“Holograms and shiny objects may be problematic”

The banknote industry has in the past decade seen holograms and other highly reflective objects presented as the primary security feature. But sparkling rainbow colors are very easy to reproduce and shiny, color changing films and diffractive ‘holographic’ foils are widely available to both the packaging industry and for decorative applications.

“The good thing about holograms is that they attract the user’s attention quickly and people generally associate them with authenticity. The problem, and it’s a big problem, is that the key perceptual feature of a hologram is “shiny” or “sparkling” or “image changing”, and these are fairly easy to mimic. Although the details might be wrong on a counterfeit hologram, the consumer probably only takes note of the main key feature, e.g.,“it’s shiny”,and uses this signal to decide that the banknote is authentic. That’s why banknotes with shiny strips may be especially susceptible to counterfeit,” says Jane.

From a perception and authentication perspective, she highlights the need for high contrast details in a security feature and for simplicity. High contrast information helps to grab attention and simplicity helps makes recognition easier. Security features should also be robustly recognizable under different lighting conditions, including low ambient light when our own visual systems lose resolution and sensitivity to color.

“I walked to an open air market and watched and videoed people using cash in this lively environment. People take at most a second to glance at banknotes and they had to do transactions under time-pressure and often in poorly lit conditions. Any security features that require really good light and close scrutiny is just not going to be safe for people. Security features need to supply fast and easy-to-see signals that work under all sorts of lighting conditions”, she says.

Arts and material science are important parts of producing banknotes since they involve everything from artistic and product design to substrate selection, chemistry, printing and advanced computing. But according to Jane Raymond, central banks should pay more attention to the human biological “filter”, i.e., the user, with the help of experts in natural science.

“I see a lot of expensive public-level security features that human brains probably find difficult to recognize or remember – the features are overloaded with details and make the task of authenticating the note really complicated from a cognitive standpoint. When people are busy doing other things, they just can’t and won’t put cognitive resources into analyzing the nuances of a complicated security feature. If banknote designers want to put the public first, they need to keep it simple,” she continues.

The future of AI and visual science

More than ten years ago, Jane Raymond founded her own consulting company, Secure Perception Research, in parallel with her university engagement. She has now started the next phase of the business and sees strong potential for expanding visual science with artificial intelligence and computer science.

“Perception science is gaining attention in the banknote world, but we are the first to leverage new techniques from AI to help speed up banknote evaluation from the user’s perspective. We will be able to offer even more accuracy in evaluating banknotes and broader consultancy services within design”, says Jane Raymond.

She is also working on finishing a book on brand protection, the second leg of her business focusing on high-value products and packaging. She sees many parallels between the banknote industry and brand copycats and counterfeiting challenges – in both cases consumers need to evaluate quickly and accurately if a product is fake.

In her work, she has observed that many consumer products that we buy regularly, we purchase in a nearly automatic way. That has made many people susceptible to purchasing fake products.

“I would like to see security labels because they provide a direct signal from brand owner to consumer that their products are real. If more and more brands start using security stickers, people will come to expect them. It’s time to start talking about these challenges from a consumer perspective”, says Jane Raymond.