Selecting security features used by the public to authenticate their banknotes tasks central banks with a host of challenges. The features must be intuitive and easy to use; difficult to simulate and reproduce; durable and long-lasting; and, for the larger central banks engaged in printing their own banknotes, integrate and process efficiently. On top of these challenges, there is significant downside for a central bank that gets it wrong. Security features that fail in circulation typically do so with a high degree of publicity, necessitating costly redesigns while incurring significant reputational damage. Furthermore, even security features proven useful in some countries can receive a range of feedback, both good and bad, when issued elsewhere.  In countries with a track record of counterfeiting, security features with overly complex effects can wind up being ignored by the public, turning an expensive new feature into an opportunity for counterfeiters.

To mitigate these risks, an increasing number of central banks are turning to commemorative banknotes to both celebrate an historic event while evaluating new security features. If the features prove successful, e.g., functioning well and receiving positive public response, they become prime candidates for inclusion in the regular banknote series. For Bank Indonesia such an evaluation got underway on August 17 when it issued a 75,000 Rupiah commemorative banknote to mark the country’s 75th year of independence. The commemorative banknote’s principal new security feature is Crane’s RAPID® micro-optic security thread having a customized visual effect based on Indonesia’s iconic Batik pattern.

The banknote and RAPID were an instant success. The central bank’s entire supply of 75 million banknotes, a quantity that smaller nations might issue over the course of a year, sold out in a matter of days. Mainstream and social media channels were abuzz with positive reports, including from the central bank Governor Perry Warjiyo who touted the banknote’s “highest and latest technology” that met the goal of the rupiah remaining “a symbol of pride for the sovereignty of the Republic of Indonesia.” With banknotes scarce and demand high, many of the commemoratives have appeared for sale on the web, in some cases at 20 times their face value! 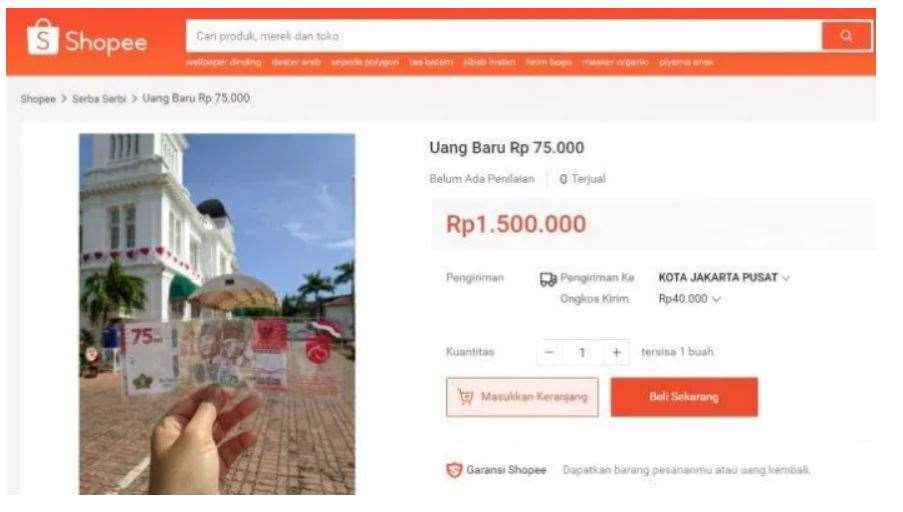 Popular with collectors, the 75.000 rupiah commemorative with RAPID micro-optics is being offered at up to 20 times its face value.

Bank Indonesia is one of the world’s largest issuers of currency and like the United States prints its own banknotes. Also similar is the systematic approach both countries use in upgrading their banknotes. Strong interest in the 75.000 Rupiah can partly be explained by the security features used in Indonesia’s circulating banknote series, which remain in paper last upgraded in 2004, incidentally a full year before Crane’s first micro-optic feature, MOTION® was introduced. The new Indonesian banknote series will consist of at least five denominations and require over a billion of each be printed and issued each year. Planning for the new series will proceed methodically and each security feature evaluated carefully.