It all boils down to software. Whether you have digital meetings with colleagues around the world, put your feet up to enjoy a great movie or drive away in your new electric car, endless lines of computer code make it possible. It’s the same thing with banknote security. The 3D security effects on many modern banknotes consist of millions of microscopic lenses created by a team of skilled designers, technicians – and software engineers. 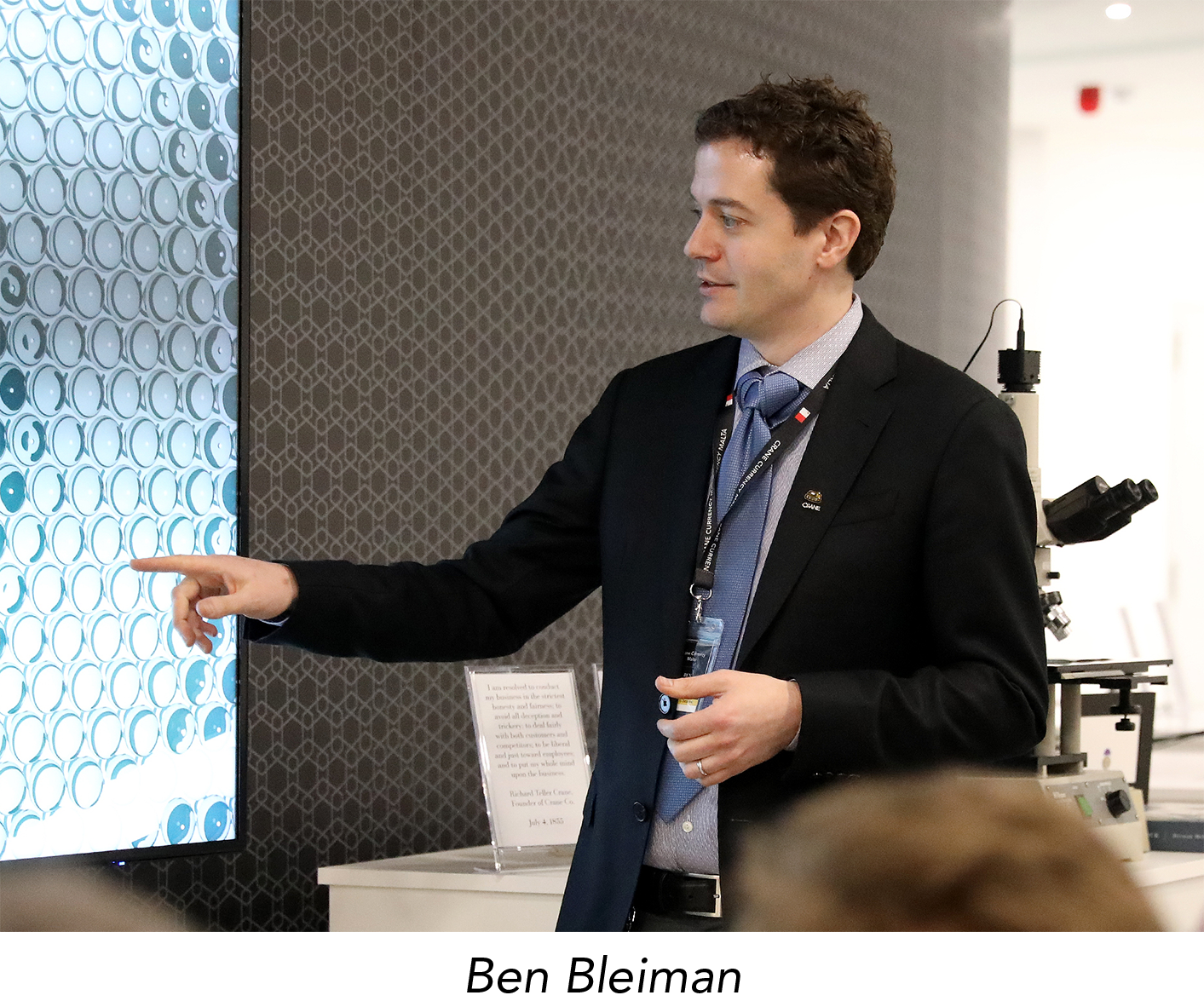 “When I started at Crane Currency, it took 20 hours just to visualize a relatively simple design of a new 3D effect. We had a mission to make the software faster and automate human error out of the processes. Today much more complex visualizations can be done in 20 minutes with high-performance computing and more advanced proprietary software. And there’s some really amazing new security effects in the works,” says Ben Bleiman, Senior Manager of Micro-Optic Design at Crane Currency in Alpharetta, Georgia.
The first micro-optic security feature was introduced by Crane Currency more than ten years ago. It got the name MOTION® to express the visual effects when moving and tilting the banknote. Since then, the micro-optic family has increased with RAPID® HD, MOTION SURFACE®, BREEZE™ and the addition of machine-readability with Detect.

Ryan Toole is a senior software engineer and hobbyist game developer. He has roots in Georgia where Crane Currency has gathered a growing team of animators and engineers in its Alpharetta offices. It’s a studio-like R&D facility where the team is constantly creating better processes and more advanced design software, resetting the boundaries of what’s possible with micro-optics.
Ryan joined the company in 2015 and is one of the driving forces behind the Micro-Optic Design software platform – or MOD, as it is referred to internally – used by micro-optic designers to deliver animations and micro-optic features to the customers of Crane Currency.
“It is a unique software suite that lets our designers create endless variations of complex 3D animations on the thin film of our products. The features are customized for each client and we never reuse designs. By taking the engineering out of the design process, we can hire talented artists to develop our products.I love to see what they do with the tools we develop,” says Ryan Toole. 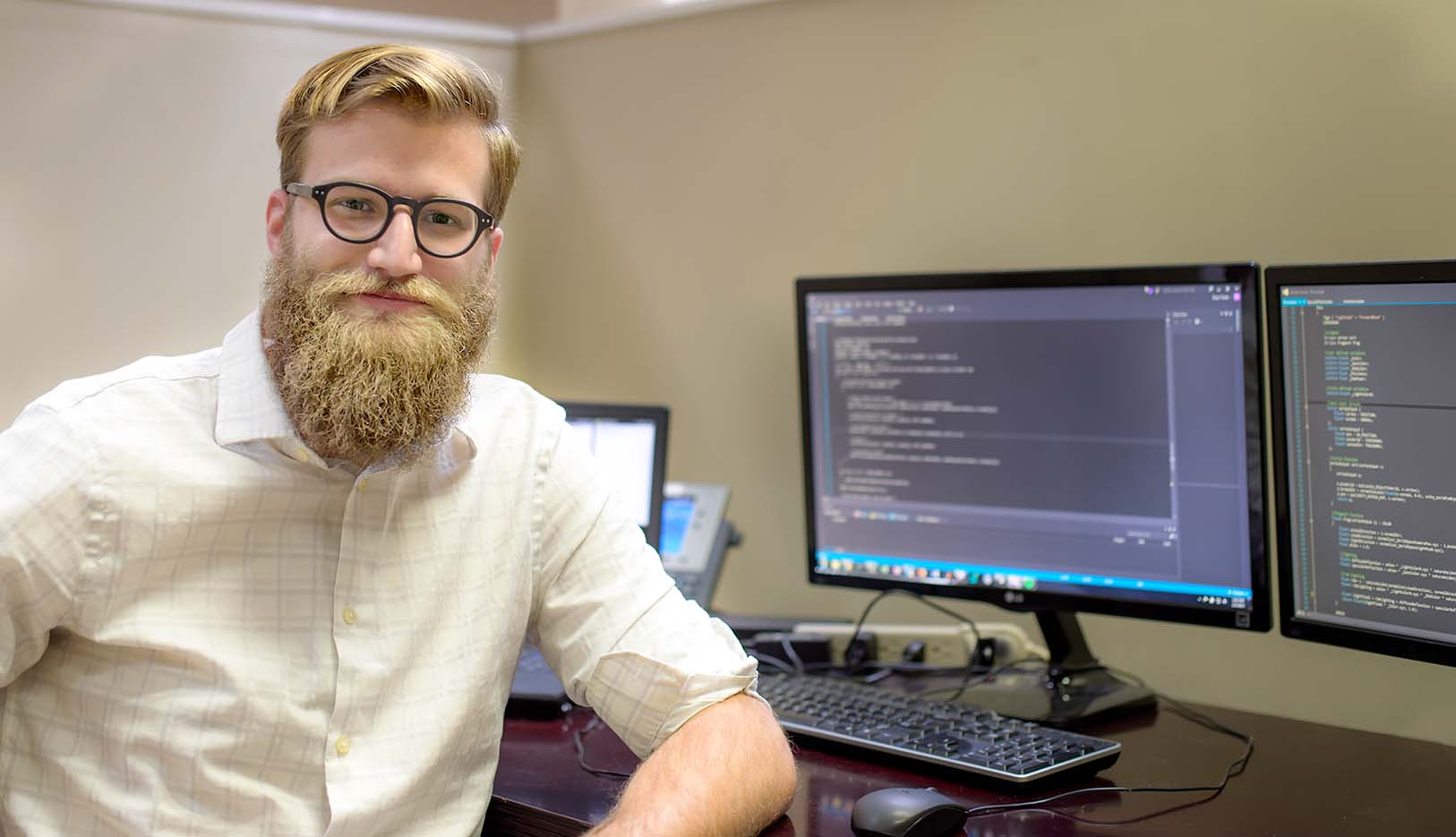 When creating a new customized micro-optic security feature, Crane’s banknote designers in Tumba, Sweden and Hal Far, Malta transfer the elements of their artwork to Alpharetta where micro-optic designers use the MOD software to incorporate their art into 3D animations. And thanks to the speed and capabilities of the software, Crane can be very responsive in meeting the preferences of central bank customers all over the world.
The MOD software consists of more than a half million lines of code. It is integrated with open-source operating systems like Linux and design software such as Blender.
The software is proprietary – and so is the material and equipment used for producing the micro-optic features at Crane Currency in its secure facility located in Nashua, New Hampshire where advanced machine-learning features are used to improve the manufacturing processes. But before sending security feature designs to manufacture, the team uses its proprietary software to simulate designs and pre-evaluate the feature’s production tolerances without the need to create time-consuming physical samples.

The ‘Wow! effect’ you get from seeing 3D micro-optics for the first time leads to curiosity. How does it work – and how can you make things move on the flat surface of a banknote?
Taking the new 100 dollar banknote issued by the Central Bank of the Bahamas as an example, the numbers behind how it all works are breathtaking. The 12 mm wide MOTION SURFACE micro-optic stripe includes a water “droplet” and schools of fish swimming deep within the banknote. Each micro-optic stripe consists of more than 3 million optical lenses. The movement we see requires around 160 frames of animation which means that 480 million lenses must be processed through all the compounding effects making up the micro-optic composition. That can be more than 4 trillion lenses worth of computation! And all this can be done and then rendered into a photo realistic animation in under 20 minutes.
“Animation at the microscopic scale creates a copious amount of data, so we have developed techniques, including our own compression algorithm, to handle the volume. And it wouldn’t be possible without Crane’s high-performance on-premises computing farm in Alpharetta,” says Ryan Toole.

“Simplicity Requires a lot of Work”

A new version of the software platform is already on its way. It includes an improved user interface for the designers and refined tools to control the manufacturing process. These translate into more options for central banks. By using elements of gamification on their banknote features, it will give the public more, and easier and faster ways to verify them while creating additional barriers to counterfeiters.
The 3D animations might look simple on the surface, but Ben Bleiman assures us that there is more to the story. To make something simple and intuitive takes a great amount of refinement and iteration, and thanks to the software, Crane’s Design Team is able to spend more of their time on all of the details that make the final product so visually appealing and easy to use by the public.
“I am so proud of what we have ahead of us and the work being done by the entire team. While the work of this team takes place behind the scenes, the software they create plays an important role in giving us our competitive edge. The apparent simplicity of our moving and 3D visual effects allow the public to easily verify them in a glance, but that simplicity requires a lot of work,” he says with a smile.