BEMs Speak for the Public

It was a perfect autumn day, cool and sunny. With a long hike behind us it was time for a well-earned ice cream. Not for me, but for my daughter, and she needed money.

The speed at which a 12-year old can distinguish a $1 banknote from a $5 banknote and these from a $100 banknote is impressive. She needed only a glimpse. Only the upper margins of the banknotes revealed themselves in my wallet and yet the speed and confidence behind her suggestion “You’d better give me the $100, it may cost more than you think,” startled me. Recovering, I assured her that seven dollars should cover an ice cream, and so she happily went away, with eight dollars, and left my wallet empty but for my jealously guarded $100.

The ability to recognize very quickly the denominations of banknotes, in just a glance, belies the complexity of the act. Common banknote validators or “bill acceptors” perform the same act of recognition and authentication impressively when one considers these machines, even top performers, cost less than $900 and are expected to reject 100% of forgeries while still accepting 100% of all genuine banknotes (Crane Payment Innovations [CPI] products are designed to accept at least 98% of all genuine banknotes on the first insertion, a performance measure commonly stated as a 98% first-pass acceptance rate).

With the acquisition of Crane Currency by Crane Co., in 2018, Crane Currency’s Banknote Designers had for the first time a sister company that was directly expert in the innovation, design and production of cash validation equipment. The resulting closeness between experts in designing banknotes (for people and machines) and those who are expert in authenticating banknotes at points of sale – quickly, accurately and inexpensively – is a novelty in the currency industry.

The reach of CPI devices accepting banknotes and rejecting counterfeits is impressive. CPI estimates that its equipment process over 150 million cash transactions every day, about 1,700 automated, authenticated banknote transactions each second. To put that in perspective, Colin Gordon of the NCR Corporation shared an estimate with Insight readers in 2017 that globally 3,000 ATM withdrawals occur every second (IBDA Insight No. 13 – May 2017).

The trend towards increasing the automation of cash, especially its acceptance is only going to accelerate, quite possibly as a result of Covid 19 and a desire to further distance ourselves, but more certainly as businesses strive to lower the cost of using cash, while also increasing the convenience of it.

Companies like CPI have historically lived on the periphery of the banknote industry. When it comes to denominating and authenticating banknotes automatically, these companies have largely been left to their own devices (pun intended). Indeed, many BEMs find valuable competitive advantage in being able to create denomination and authentication algorithms from their own interrogation of banknotes, not from information provided to them by the issuing central bank. This makes a great deal of sense. Simply because Crane Banknote Design and CPI are now related doesn’t change the poor business case of making security features that require special sensors. That type of thinking may work for very expensive banknote systems used by central banks, but it is restrictive, expensive and impractical in every other part of the cash processing landscape.

So if there is questionable value in bringing together banknote equipment manufacturers (BEMs) and Banknote Designers to create feature-sensor systems, where is the value?

We feel the answer is in having a better understanding of how designing banknotes for BEMs increases the utility and security of banknotes and thus the value to the central banks that issue them.

For decades, BEMs have been creating great value for the cash using public by exploiting relatively common sensors coupled to ever smarter algorithms to authenticate banknotes. What is new and ever changing is the environment in which these equipments operate. Just as an increase in commercial films and foils and commercial color changing inks pressure the security of some public features, access to materials and information used for machine detection are becoming easier to find and use. The potential for eroding security may not happen overnight, but is largely assured to happen over time.

Consider the operational environment of bill acceptors of a prior generation, it can be described by:

In that environment, magnetic inks and common magnetic sensors were a sensible pair (think of cassette tape and the heads used to read them). These provided reasonable performance (good acceptance) and a security level that was commensurate with the lower threats of that time, as well as the low value of banknotes being processed. 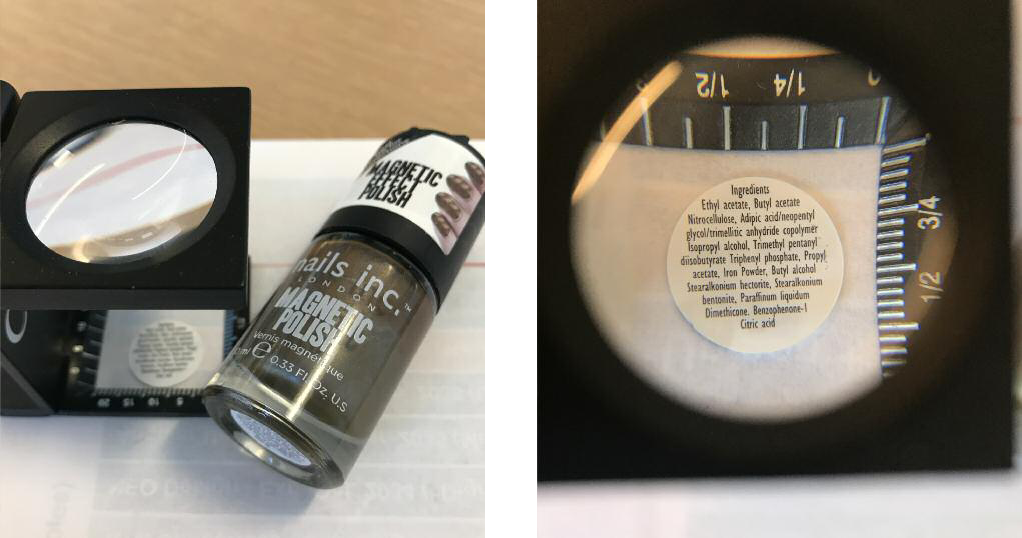 Materials that can simulate the magnetic features sensed by BEMs are making their way into a range of consumer products (iron powder, nail polish).

Move Away from Magnetic Detection and Sensors Contacting Banknotes

Today, we see hard magnetic materials, e.g., iron powders, used in a range of common materials and some in forms that can be deployed directly to counterfeits. As a result, many BEMs especially those operating in the fast expanding Point of Sale markets and including CPI, are relying less and less on magnetic detection. The move has been driven by both acceptance and security. Simulation of a magnetic presence, once difficult, is today as easy as printing a copy using magnetic toner (iron powders are added to improve print quality).

As for acceptance, there is a move away from sensors that require contacting the banknotes. Contact can and does cause banknotes to get stuck in the note path. For an operator, a disabled acceptor means no sales and frustrated users. This is a point of high importance that Banknote Designers should listen to: CPI has seen that bill validators using contacting sensors, e.g., magnetic heads, are well over five times more likely to fail in the field than similar acceptors using noncontacting sensors, e.g., Infrared detection. 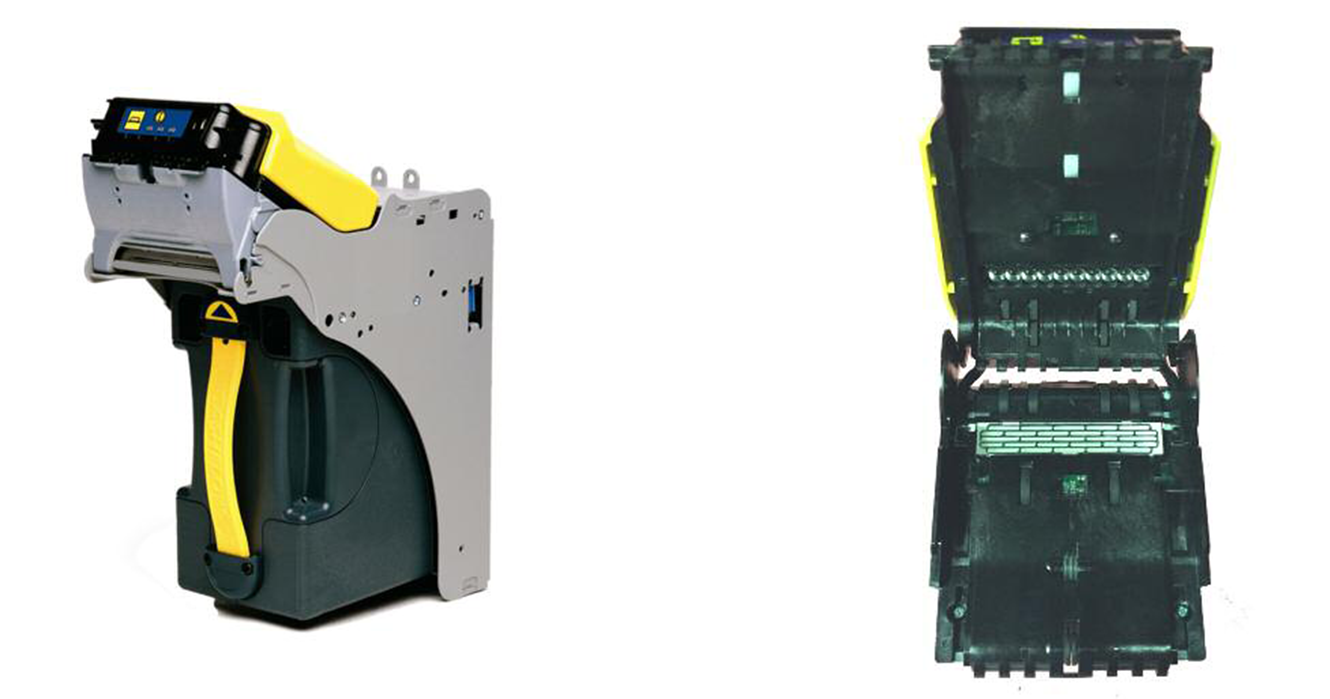 A typical banknote validator SCR from CPI. Open wide and look! No magnetic sensors in the note path that can lead to jams and failures

A recent and novel innovation to come out of Crane Currency’s relationship with CPI is the addition of machine-readability to micro-optic security threads. MOTION Detect and RAPID Detect are to the public indistinguishable from their earlier versions, but include a secure, invisible IR-material that is unavailable outside of the currency industry. The addition provides all manner of BEMs, from inexpensive acceptors to high speed sorting machines with a reliable feature with which to authenticate the security thread and banknote. Importantly, the machine verifiable material is very secure, and cannot be simulated with commercially available materials, the Achilles Heel of hard magnetic materials still common to many security threads.

While easily verified by machines, the IR-material does not impact what is seen by the public, and so adds no additional challenges to the Banknote Designer intent on customizing the moving, micro-optic visual effects. Where a challenge is imposed upon the Designer is in ensuring the placement of MOTION Detect and RAPID Detect do not interfere with other IR absorbing materials and features relied on by the BEMs. Here it is important that the Banknote Designer understand not only the security thread’s function, but the requirement of the BEMs, and better still, its preferences.

A ‘BEMs’ view of the Bug Note, a house note by Crane Currency. The comparison of 3D traces illustrate the combined sensor outputs of a house note, first with RAPID® and then with RAPID® Detect. The Bug Note also uses the machine-readable security inks: NeoMag® and SICPATalk® – from SICPA.

CPI is the market leader because it delivers great banknote acceptance and authentication equipment at a cost low enough to attract businesses to invest in them. With nearly 3500 automated cash transactions being conducted by CPI and its competitors every second, the value in public convenience and cost savings that these companies supply is significant. Banknote Designers and central banks should therefore recognize that BEMs like CPI speak for the public, or at least for an important part of their relationship with cash. By doing so, we can together continue to deliver more value to currency users.